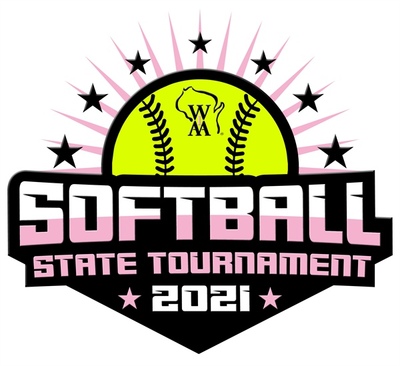 The 45th Wisconsin Interscholastic Athletic Association State Softball Tournament will take place today thru Wednesday, at two venues in Green Bay, Wis. The Division 1 quarterfinals will be held at Bay Port High School and the remainder of the tournament played at King Park on the University of Wisconsin-Green Bay campus.

THE DIVISION 1 FIELD:  Top-seeded Kaukauna returns to the State Tournament for the third time. The Galloping Ghosts captured the gold trophy in  both their previous State appearances including 2010  and  2017. They advance to the quarterfinals this season following a 6-1 victory over Green Bay  Preble in the Ashwaubenon Sectional final. They are the champions of the Fox Valley Association this spring. Sun Prairie is the second seed in the bracket. The Cardinals return to State for essentially the fourth straight year, not including 2020 when the season and tournament was canceled during of the COVID-19 pandemic. They qualify for the seventh time overall. The Cardinals finished runner-up in 2019 after winning the title in 2018. They also advanced to the championship game one other time, finishing runner-up in 2012. They are the champions in the Big Eight Conference this season, and they earned another shot at the title with a 15-0 blowout over Holmen in three innings in the Middleton Sectional final. Hamilton is seeded third. The Chargers last participated in the State Tournament in 2012, and their furthest advance toward a title in the program’s previous eight appearances was to the semifinals in 1980 and 1987. They are back in the State quarterfinals by virtue of their 5-4 win over Muskego in the sectional final hosted by the Chargers. They won the Greater Metro Conference championship this year. Fourth-seeded Burlington returns to the State Tournament for the fifth time overall and for the first time since finishing runner-up in 2018. The Demons won the Class A championship in their first-ever appearance at State in 1984. Their return to the tournament field comes following a 6-0 shutout over Oregon in the sectional final played at Oregon. During the regular season, they placed  runner-up in the standings of the Southern Lakes Conference. Fifth-seeded Cedarburg returns to State for the first time since 2004 and for the 10th time overall. The Bulldogs’ furthest advance in the tourney was to the semifinals in 1981, 1992 and 2001. This season, they are the champions in the North Shore Conference. They qualified for the final eight with a 7-1 triumph over Divine Savior Holy Angels in the final of the Wauwatosa East Sectional. Sixth-seeded Chippewa Falls makes its third straight State appearance and the programs’ 14th overall. The Cardinals won the State championship in 2012, and they finished runner-up in 2006 and in 2009. This year, they finished runner-up in the Big Rivers Conference standings.  The Cardinals are the representatives out of the Chippewa Falls Sectional following a 12-5 victory over Marshfield in the sectional foul held at Chippewa Falls. Seventh-seeded Beaver Dam is making its fourth appearance overall and its first since 2004. The most notable State experience for the Golden Beavers came in their first appearance when they advanced to the semifinals before being eliminated from title contention. During the regular season, the Golden Beavers finished in a first-place tie with Mount Horeb in the North Division of the Badger Conference. They downed Oshkosh West 3-1 in the final of the Hartford Sectional to gain their berth in the tournament. Wilmot Union, the eighth seed, returns to the tournament field for the 11th time and for the second time in a row, not including the canceled 2020 season. The Panthers have won a State title. That came in Class B in 1990. They also have finished runner-up twice, including 1982 and 2017. They finished. fourth in the Southern Lakes Conference this spring. They downed Kenosha Indian Trail 6-3 in the final of the Kenosha Bradford Sectional to advance to State.

THE DIVISION 2 FIELD:   Top-seeded Jefferson returns to the final four for the first time since back-to-back appearances in 1992-93, which resulted in losses in the semifinals. The Eagles are the champions in the Rock Valley Conference this season, and their pursuit of a State title continues after a 6-2 win over Mount Horeb in the Big Foot Sectional final. Second-seeded Baldwin-Woodville will experience the State Tournament for the fourth time and for the first time since 2013. In each of their three previous appearances, which came in succession from 2011-13 the Blackhawks have advanced to the championship game. They captured gold in 2012 and finished runner-up in 2011 and 2013. This spring, they are the champions of the Middle Border Conference. Their path to State was paved through the Mosinee Sectional that culminated with a 5-3 win over Merril in the final. Third-seeded Marinette is the third seed. The Marines are also going to experience the State Tournament for the first time. They defeated Denmark 5-4 in the Winneconne Sectional final. They ended the regular season in third place in the North Eastern Conference. Fourth-seeded Catholic Memorial qualifies for State for the first time. The Crusaders celebrate their initial appearance following a 13-3 win over New Berlin West in the Whitnall Sectional final. They finished fifth in the Classic Eight Conference this season.

THE DIVISION 3 FIELD:  Top-seeded Dodgeville qualifies for State for the third time. Their first two appearances in 1992 and 2000 resulted in runner-up finishes. The Dodgers defeated former two-time defending champion Poynette 1-0 in nine innings in the Prairie du Chien Sectional final to earn the berth in the tourney field. They finished runner-up in the Southwest Wisconsin Conference this spring. Second-seeded Prescott is essentially making it’s third straight appearance and its sixth overall. The Cardinals are attempting to advance past the semifinals for the first time, having been eliminated from title contention in the semifinals in Division 2 in 1993 and 1998, and in Division 3 in 2002, 2018 and 2019. They are runners-up in the Middle Border Conference this year. The Cardinals advanced through the Bloomer Sectional with a 3-0 shutout over Northwestern in the sectional final. Third-seeded Peshtigo qualifies for the second time. The only other experience was in 2010, which resulted in a championship. They continue their pursuit of another title after cruising past Wittenberg-Birnamwood 12-0 in six innings in the final of the Oconto Falls Sectional. The Bulldogs placed second in the Packerland Conference this season. Lomira was issued the #4 seed. The Lions only other experience came in 2015, which resulted in a loss in the semifinals. They traveled to Chilton and defeated the Tigers 6-4 to earn their second trip to State. They are runners-up  in the Wisconsin Flyway Conference this spring.

THE DIVISION 4 FIELD: Top-seeded Blair-Taylor moves up a division to qualify for State after finishing runner-up in Division 5 in 2019.  The Wildcats qualify for State for the fourth straight season. The program’s first appearance resulted in a runner-up finish in 2017. They advance to the State semifinals as a result of a 6-5 come-from-behind victory over former two-time defending champion Horicon in the sectional final played at Blair-Taylor. They are the champions in the Dairyland Conference this spring.  Second-seeded Mishicot, the 2019  runner-up, will make its fourth appearance at State. The Indians’ two experiences prior to 2019 ended in the semifinals in 2014 and 2016. Their return to the tourney field comes following an 8-2 victory over Iola-Scandinavia in the Random Lake Sectional final. The Indians finished first in the Big East Conference this season. Phillips is seeded third. The Loggers are making their second appearance at State. Their first came in 2017, which resulted in a loss in the semifinals. This season, they qualify with a 10-6 win over Fall Creek in the Grantsburg Sectional final. The Loggers finished in a first-place tie with Athens in the North Division of the Marawood Conference. Fourth-seeded Juda/Albany will make its third State appearance and its first since winning the title in 2017. The Panthers placed third in the East Division of the Six Rivers Conference standings this season. They earned their berth in the tourney by edging Iowa-Grant 1-0 in the Boscobel Sectional final.

THE DIVISION 5 FIELD:  Oakfield is making its 15th State appearance overall and its first since 2018.  The Oaks have won five State championships, including Division 4 championships in 2009, 2011, 2012 and 2014, as well as the Division 3 crown in 1997. They were also the Division 4 runners-up in 2004, 2015 and again in 2018. This season, they are the champions in the North Division of the Trailways Conference. The Oaks advance to the semifinals by defeating Barneveld 7-5 in the final of the sectional played at Oakfield. Second-seeded Pacelli qualifies for State for the 10th time and for essentially the second straight season with the cancellation of the 2020 season and tournament. The Cardinals move down to Division 5 after qualifying in Division 4 the past four trips to State. They have won Division 4 titles in 2003 and 2015 and finished runner-up in 2017. They also won a Division 3 title in 2012 with a runner-up finish in Division 3 in 2011. Prior to joining the WIAA, the Cardinals won six consecutive titles from 1992-97 while a member of WISAA. This season, they finished first in the South Division of the Central Wisconsin Conference and advanced through the Almond-Bancroft Sectional with a 2-0 victory over Laona/Wabeno in the final. Third-seeded Hurley returns to State for the first time in a decade. It will be the NorthStars eighth overall appearance. They were the Division 3 runners-up in 2001, and the  runners-up in Division 4 in 2007. They are the champions of the Indianhead Conference this spring, and they earned the opportunity to return to the State Tournament with a 3-2 win over McDonell Catholic in the final of the Athens Sectional. Fourth-seeded Seneca will experience the State Tournament for the eight time and for the first time since winning the Division 3 crown in 2000. The Indians also captured the Class C title in 1982. They also advanced to the championship game in 1992 and 1996, which resulted in  runner-up finishes.  The Indians edged Independence/Gilmanton 3-2 in the Bangor Sectional final to earn their berth in the tourney. They are the champions of the Ridge & Valley Conference in 2021.