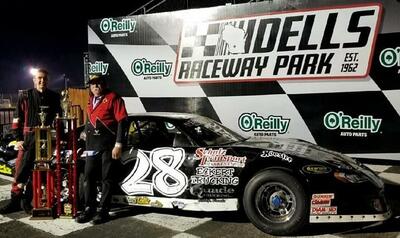 Jesse Bernhagen of Willard, was the surprised winner of the CWRA Super Late Model Nabbefeldt 55 Saturday Night at Dells Raceway Park after being awarded the win after finishing second on track to Corey Jankowski who failed to pass post race inspection.  Jankowski was disqualified for using a 4 barrel carburetor, they are only allowed a two barrel.

Earlier in the night is was Mike Seivers of WI Rapids capturing the pole of the Nabbedeldt 55 with a win in the odd qualifiers dash and Jankowski won the even dash. Mark Mackesy was fastest in qualifying with a mark of 14.597 81.387mph.