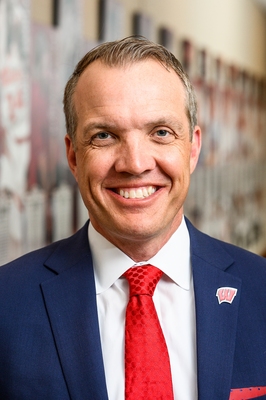 Chris McIntosh, University of Wisconsin–Madison deputy athletic director and a decorated student-athlete who captained two of the most celebrated teams in Badgers history, has been named to the post of director of athletics, Chancellor Rebecca Blank announced today.

Blank will introduce McIntosh at a 2 p.m. CDT event today at the Kohl Center. The event will be broadcast live on the Big Ten Network and Wisconsin Athletics social channels. Big Ten Commissioner Kevin Warren will also attend.

As part of his athletic career, he captained the 1999 and 2000 Rose Bowl teams, two of the most storied teams in Badgers history. He was a consensus NCAA All American in 1999 and 22nd pick in the 2000 NFL Draft, playing professionally for the Seattle Seahawks until 2004. He is a member of the Badgers Hall of Fame.