Joe D here, growing up I played sports and always loved music. As I got older, I stopped the sports and focused more on music. I taught myself to play bass and eventually guitar, which lead me to get a degree in music performance. I've played in locals bands and even spent a couple of years touring with Joey Belladonna of Anthrax. He asked me to play bass in is solo band, Belladonna. That was one hell of an experience! I'm a huge NFL fan. I also love heavy metal and I like to fish when I can find the time.

Born and raised in Neillsville and still lives here with his wife Cindy, daughter Maggie, 2 sons Andrew and Adam, dog and cat. Been a part of Central Wisconsin Broadcasting now for over 20 years and still lovin' every minute of it.

Hi, I’m Lindsey! Animals are my thing. I’m extremely passionate about their well-being. I became vegetarian in 2007 and vegan in 2011. I've adopted and fostered (I currently have two rescued cats and another foster), and if I could I'd have every animal. I love hiking, running, horseback riding, yoga, skiing--anything involving nature and being active. I'm learning guitar and I've begun painting. I love wordplay/puns, craft beer, and I have PLENTY of tattoos and piercings. Hope you hang out with me tonight!

Hi, I'm Robbie Knight! Mom raised me on classical music and Bluebird Jazz records. But when I heard metal music, that was LIFE. I love all the Metals and the music that inspired them. I never outgrew comics, action movies or stupid jokes. And I never developed an "indoor voice". I blame that on being a game warden's kid but it's just that I'm loud, really. Life sounds better cranked up to 11.

I was born in raised in Central Wisconsin, growing up in the Greenwood area.

I graduated from Greenwood High School in 2007. Then I attended the Illinois Center for Broadcasting in Lombard, IL, a suburb of Chicago, in June of 2008 and graduated the following spring.

After I finished school, I moved back to Wisconsin and held several leadership and management positions with different companies before coming to Central Wisconsin Broadcasting in February of 2012 as the News Director. In June of 2016, I started my midday air shift from 10am-1pm on 107.5 The Rock.

I am a bit of a geek, being a big fan of music, movies, video games, TV shows, books and more. My favorite band is Five Finger Death Punch followed by Disturbed and 10 Years. I can’t really pick an absolute favorite movie because I like so many. My favorite video game series is The Legend of Zelda, books is Stephen King’s Dark Tower Series and I like a lot of different TV shows as well. 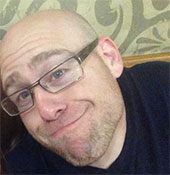 Hey, I’m Twitch. I grew up in the strip club capital of the world; Tampa, Florida. My first job was cooking BBQ outside of one of these fine establishments. I got into radio by relentlessly prank calling the evening DJ until he finally had enough, and asked me to produce his show. Now I am married, have two little kids (Whose names escape me at the moment), and pass the time with craft beer and fine bourbon. I also like to cook, box and sleep... when the girls let me.

What up, fam, I'm Woody! I'm from Southern California but I've lived all over... in Houston, Tulsa, Minneapolis and I spent a short stint in Florida too. I'm married. I love my wife and basketball (in that order) and I love taking her to games and rock shows. My favorite bands are Deftones, Queens of the Stone Age and Deftones again. I also do commercial voice over work for the likes of Red Wing shoes, Purina, and Old El Paso.